You are here: Home / Parenting / Finding Your Child’s Element
DISCLOSURE: This post may contain affiliate links, meaning I get a commission if you decide to make a purchase through my links, at no cost to you. Please read my DISCLOSURE for more information.

Ever since Aristotle was little, he has had a very good concentration span. He could sit down to an activity and stay with it for a significant amount of time. Hercules, on the other hand, looked like a child with ADD in comparison. He would bounce from activity to activity, never staying long enough to see it through to the end. I confess that I had become fearful that the only thing that could hold his attention for any significant amount of time was a screen… Well, okay, that’s not entirely true either because Hercules can spend hours at a playground and in a swimming pool but neither of these activities are practical if we need to be indoors. For instance, how do I keep him busy when I need to cook?

Then I discovered the power of play doh with a child like Hercules. Although we have various play doh sets around the house, I confess I have been reluctant to bring them out because Hercules has a penchant for making a huge mess out of anything he plays with. He once found a tub of play doh and managed to open it by himself. For a change, he had been silent for a really long time until I started to worry about what might have happened to him. When I found him, he was industriously smearing his play doh onto every square inch of my glass-topped table. Kids… even when they’re quiet you need to worry about what they’re up to. 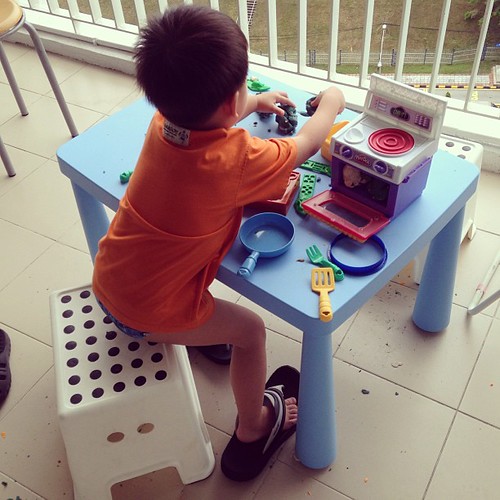 My I-can’t-focus-on-anything-for-very-long child spent the entire morning cooking up a storm with his play doh. I’m certain he would have spent the whole afternoon there if I hadn’t pulled him away for lunch. I thought perhaps it was a rare occurrence because he doesn’t usually get to play with play doh, but he has consistently been asking for play doh. Whenever I do take it out, I am the one who has to tell him it’s time to stop.

So there you go… if you feel your child has a short attention span, perhaps you just haven’t found that element which ignites his passion.

Sometimes, without intending to, we are the barriers that block our children’s paths. I’ve written before about how easy it is to get caught up in wanting something for your child more than your child wants it. For instance, you’ve always wanted to play the piano but never had the chance to learn as a child. Now you’re determined to give your child music lessons. At first your child is excited. Music lessons are fun. The teacher is encouraging because your child shows promise. You get excited and your excitement carries you way ahead of your child. Instead of encouraging your child’s interest in music, you’ve unwittingly squashed it.

The example above is the exact opposite. Instead of overtaking our children’s enthusiasm for a particular interest, we allow our dislike for that interest get in the way of our children’s pursuits. In this case, it isn’t that I dislike play doh. I dislike the mess it creates and the cleaning up that I’ll have to do after. Because of that, I’ve been discouraging the boys from playing with play doh instead of encouraging their interest. Another example might be a child who likes to pretend he’s playing the drums. Can you imagine the awful racket that he makes? It’s enough to give you a migraine to last you until New Year.

I realise that molding play doh and banging on pretend drums probably seem insignificant but you can extrapolate it to something bigger, like a career. Similar to this example, our biases may mean that we discourage our children’s aspirations for certain careers that we don’t like. It isn’t just pushing our children to do things that can be detrimental. Holding them back from pursuing their dreams can be just as bad.

So what are some interests that you really dislike? Are you unwittingly preventing your child from pursuing that interest? Something to think about.