When Gavin was little – back before he could walk and decide where he wanted to go – I would take him window shopping and I would hit all the baby shops to look at all the cool new stuff available.  Ever since Gavin found his feet, he’s been deciding where we go and that was it for me at the baby shops.  Now that Gavin’s at school, I’m window shopping with Gareth at the baby shops again and I’ve discovered that there are so many very cool new products in the market.

One of the cool new products I’ve seen in the market recently is the Mebby Body Up.

What so special about it?  It grows up with your baby.  The Mebby Body-Up is a romper designed to fit a child from birth up to age 3.   This new generation high tech fabric stretches as your baby increases in size.  Now this would have been perfect for my babies…

Aside from the fact that you never have to buy another baby romper again after you get a set of these, the Mebby Body-Up also boasts the following benefits:

Is there anything else you could ask for?

I’ve seen it at Safe ‘N’ Sound in 1Utama and Mamours in Midvalley Megamall.  Mamours is part of Planete Enfants so I’m assuming you can find it at all their branches.  It is also available online from FabulousMom and The Baby Loft. It costs RM 188, but The Baby Loft is currently running a promotion and retailing it at RM 178.60.  If you think about how much baby clothes costs these days, it’s actually pretty worth it.

Although Gavin has been adjusting well to school, there is still one slight problem we keep encountering: wearing his school uniform.

There are two school uniforms at Gavin’s playschool – the sports uniform, which looks like this: 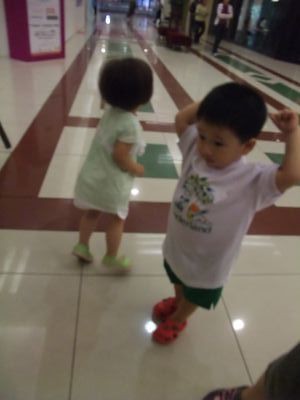 It is usually worn on Tuesdays and Thursday.  Gavin has no issues wearing this uniform.

Then there is the formal school uniform, which looks like this: 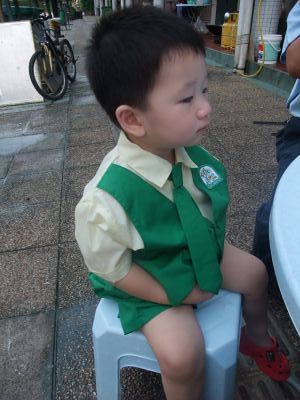 This is worn on Mondays, Wednesdays and Fridays.  For some reason, Gavin hates it.  Not the shorts, just the top.

You might be wondering how we managed to get him into the top for this photo…  Well, you can see from his expression in the photo that he didn’t like it one bit.  He even attempted a hunger strike to protest against wearing the uniform.  Unfortunately for him, breakfast happened to be his all-time favourite noodles – Wan Tan Mee – and his will power lost out to his taste buds.

At first we couldn’t determine whether it was the shirt that he didn’t like, the fact that it wasn’t Thomas and Friends or that it signified having to go to school.  Now that he seems willing enough to go to school and that he doesn’t mind wearing his sports uniform, I’ve come to the conclusion that it is simply the shirt that is the problem.

Ever since Gavin was little, he has never liked button-down shirts.  Every single button down shirt we have tried to make him wear has been met with resistance.  Back then, it was simply a matter of offering him something else to wear.

Unfortunately, no other kid seems to have a problem wearing the school uniform – except mine.

I’ve been pondering over the problem and have come up with the following solution: 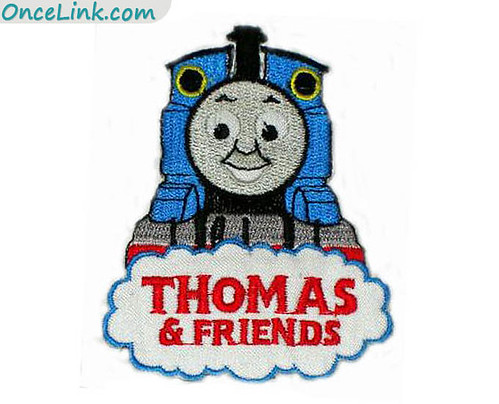 It is an iron-on Thomas and Friends applique that I found on eBay that I intend to stick onto his school shirt.

What do you think?  A winning idea?