What do parents want most for their children? According to a survey, happiness came out top for most countries. Even if it wasn’t the top, it was a close second. The problem with that, as Jennifer Senior so rightly expressed, is that happiness is a very high bar and much of the advice on raising happy kids warns us that focusing on happiness is the wrong way to go.

According to the Grant Study, the one thing that makes us consistently happy are our relationships with other people. In other words, having good friends. If we want our children to be happy, the goal should be to teach them how to make friends and keep them. For that, children need good social skills. – How to Raise a Happy Child

Another way to help young children explore emotions and develop social emotional skills are with Kimochis. Some of the concepts are quite similar to Neuro-Dramatic Play…

Kimochis are toys with feelings inside – (Kee-Mo-Chee means “feeling” in Japanese). They are small pillows with a feeling (happy, sad, silly, brave) printed on one side, and a corresponding facial expression on the other. Each Kimochi character comes with a set of three feelings and a How-To Kimochis feel guide. The characters also have a special pocket where kids can store their “Kimochis” – or feelings. Using the characters and their Kimochis, children can get in touch with their emotions through puppetry and play. The feel guide (preview below) introduces the fun and quirky personalities of each character and offers parents fun tips and engaging activities to help strengthen parent child connections and develop healthy social and emotional skills.

Bug is a caterpillar who is afraid of change. He is thoughtful, cautious and he has secret dreams of flying. Bug’s wings tuck away in a pocket on his back, and he comes with 3 feelings: Happy, Brave, and Left Out.

Cat is a decisive leader and can be very persuasive. Her bossiness can sometimes lead to confrontation and occasional “cat fights”. Cat comes with five bandages to help heal hurt feelings, and these 3 feelings: Happy, Curious, and Cranky.

Huggtopus is all smiles and giggles. She is very affectionate and strong and sometimes she gets a little carried away by her big friendly personality. Huggs always means well but she needs to learn about boundaries. Huggtopus comes with 3 feelings: Happy, Frustrated, and Silly. Unlike her friends, Huggtopus stores her feelings in her mouth. 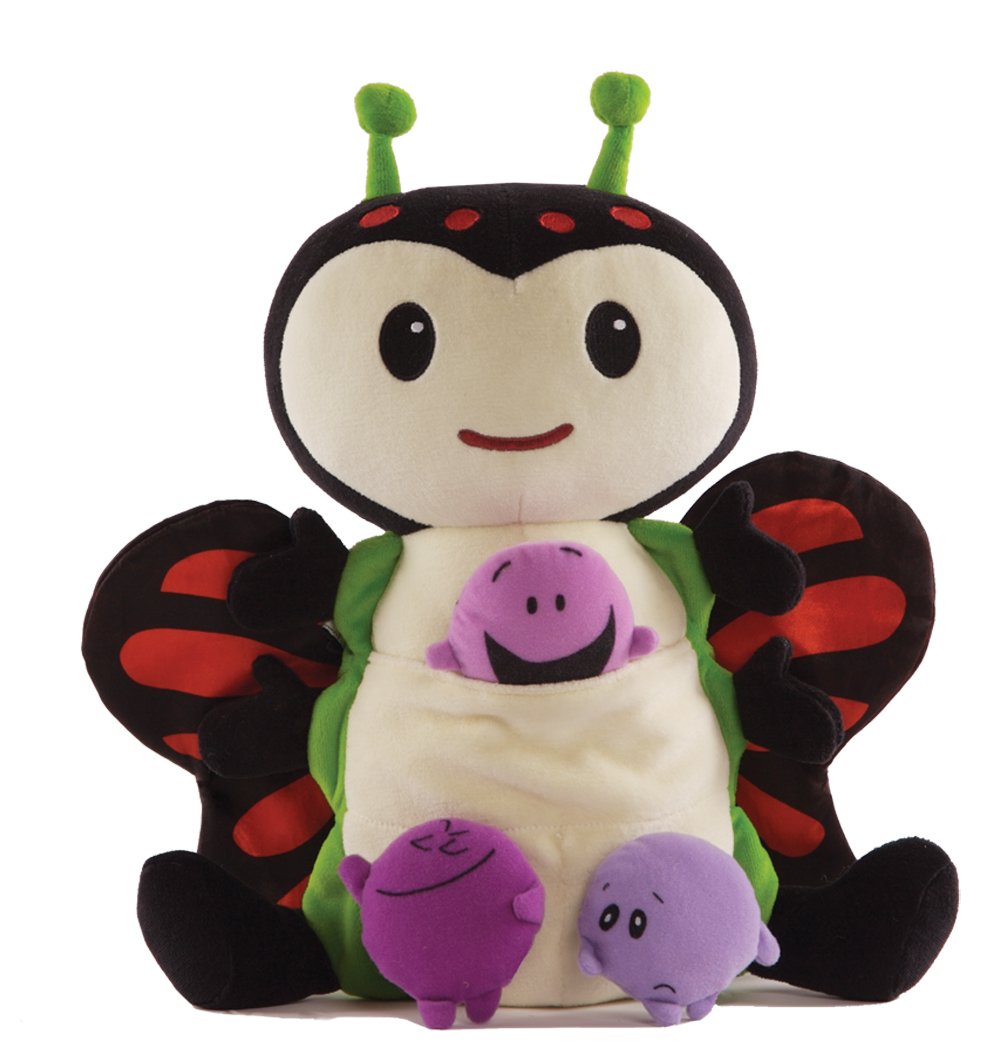 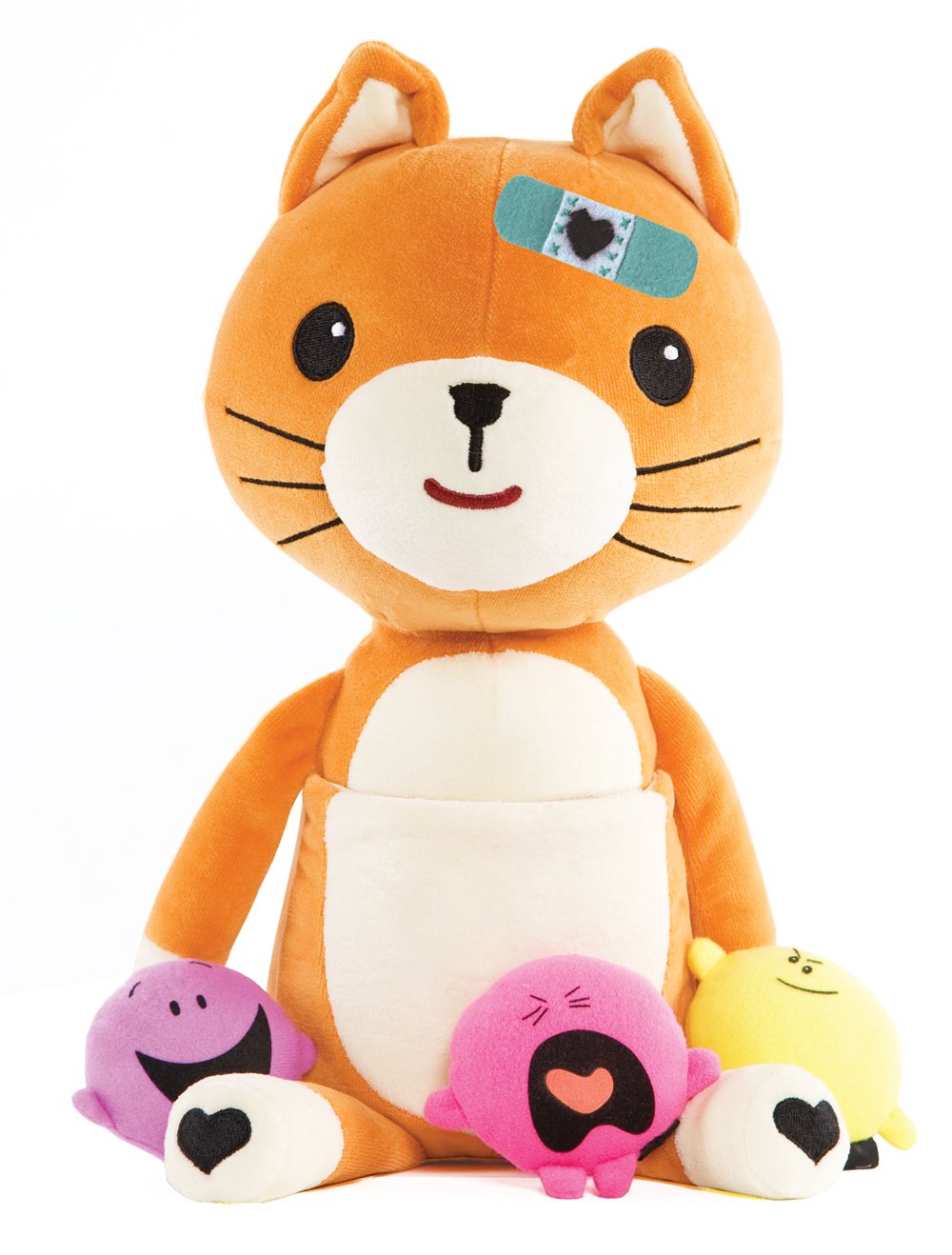 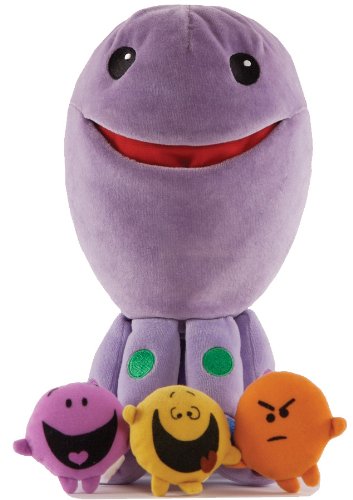 Clover is a four-leafed clover with bad luck. Clover comes with his lucky, removable ladybug, Howard. Clover’s 3 feelings are Happy, Optimistic, and Disappointed.

Bella Rose is sensitive and sweet. When her feelings get hurt, Bella Rose has a hard time expressing herself and tends to close up into a bud. Bella Rose comes with three feelings: Happy, Sensitive, and Insecure. 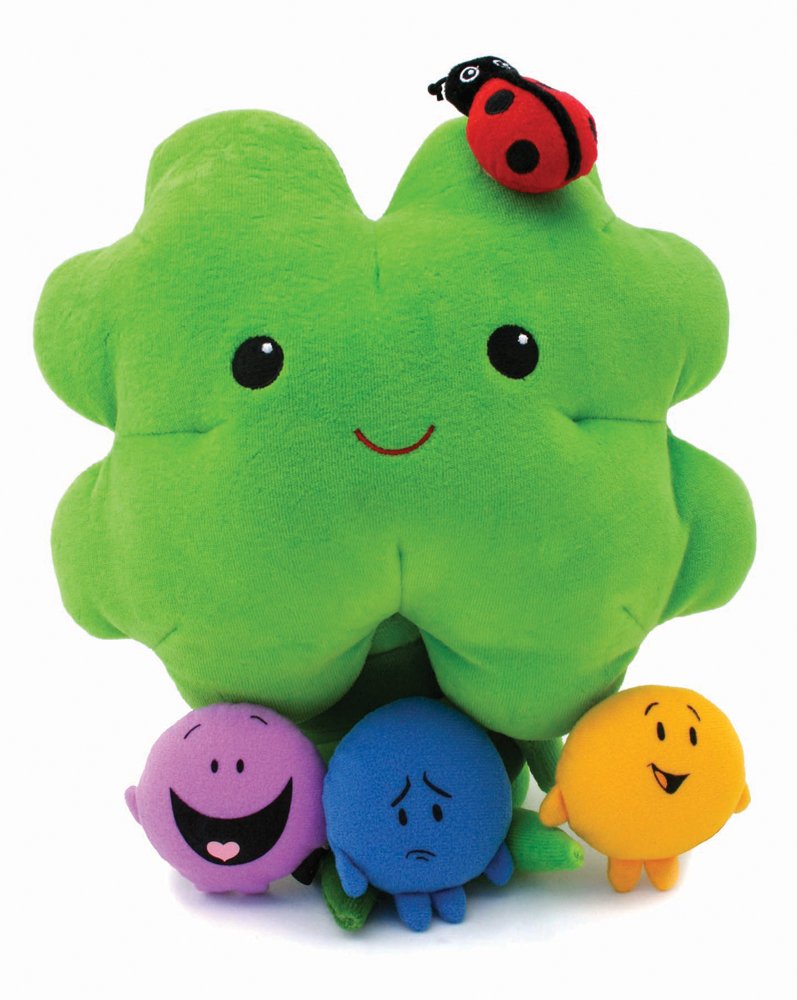 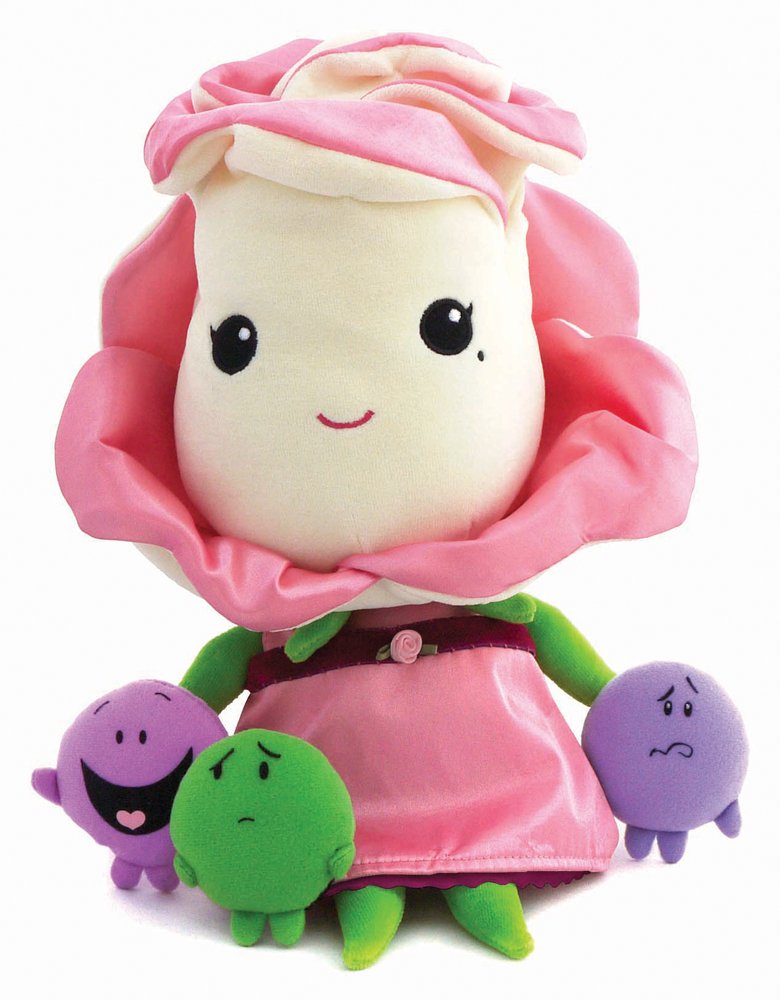 Cloud is like the weather – a bit unpredictable. One day he is happy, the next he is mad, and the next day, who knows – maybe sad or even happy again! Because Cloud can be moody, it is sometimes hard for him to get along with others. Cloud can show his mood with a simple turn of his head – he has a happy face on one side and a sad face on the other.

Lovey Dove is nurturing and patient and, like all doves, likes to keep the peace. Lovey comes with her baby, Turtle Dove, tucked gently underneath her wing. Her three feelings are Happy, Hopeful, and Proud. 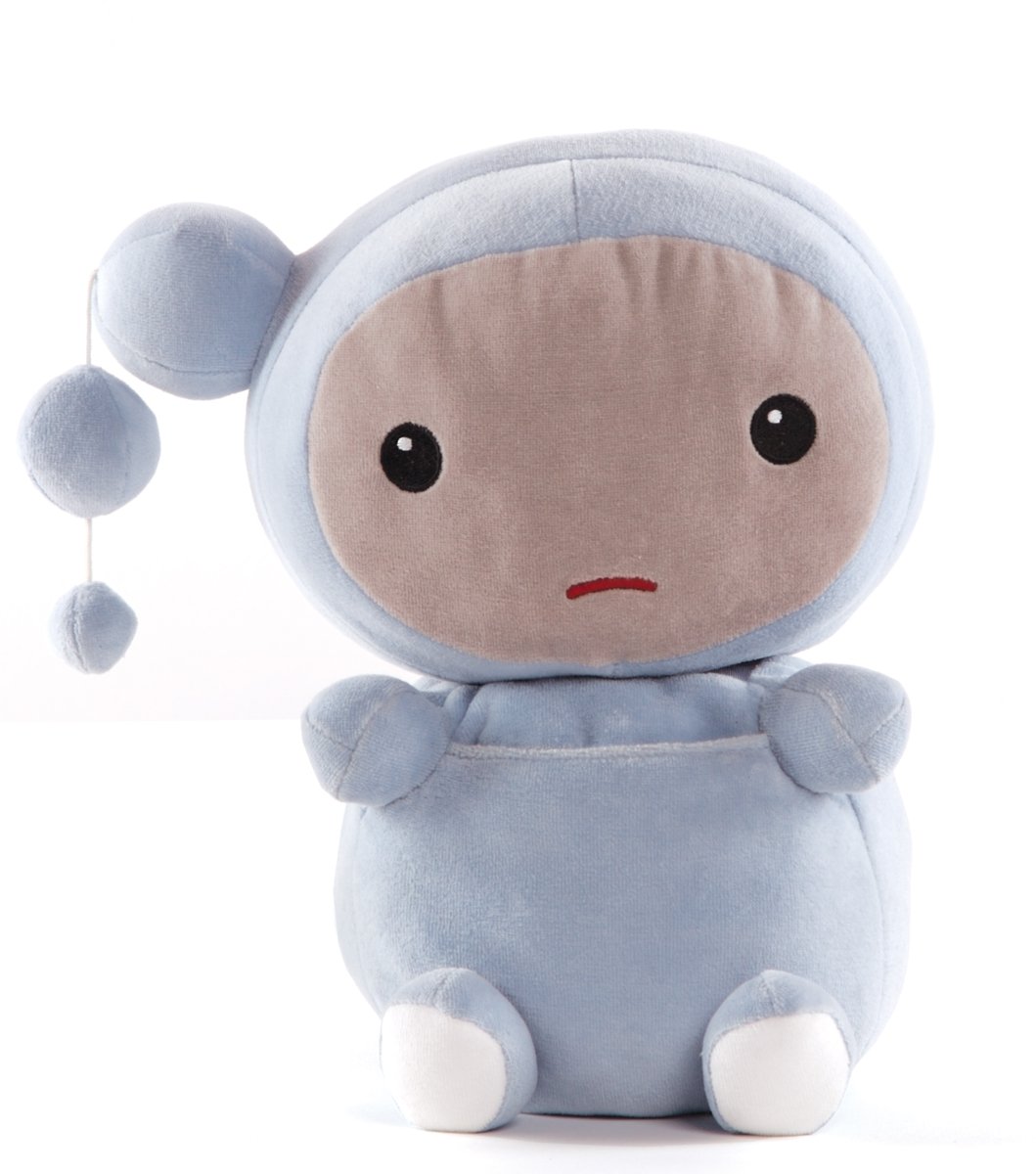 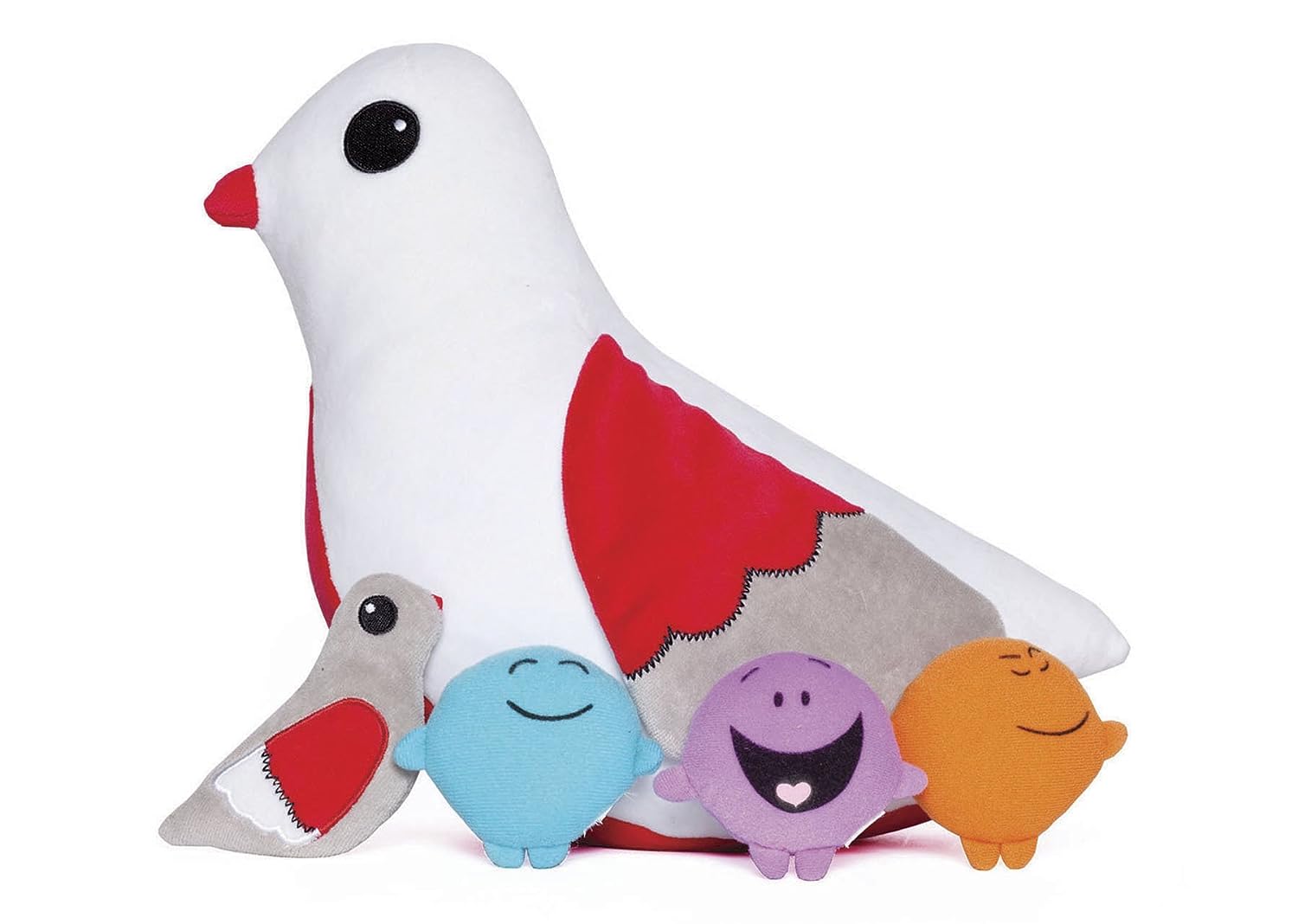 I know I wrote about it only a couple of days ago, but it’s been difficult to remember why I wanted to send Gavin to playschool in the first place.  With his negativity towards school growing by the day, it is getting harder and harder for me to accept my justifications for sending him to school so early.  Admittedly, it is still early days and I have promised to see him through two weeks of school before making a decision on whether to pull the plug on the idea.  Nevertheless, the process has been painful not only for him but for me.

I’ve read plenty of articles that are intended to help prepare parents (or rather more particularly – mothers) for the time when their children start school.  The focus of most of these articles have been on the fact some mothers find it hard to cope with their children going to school because of the emotions that are akin to the “empty nest” syndrome.  Suddenly their totally dependent child is growing up and going away – it can be hard on some parents.

Personally, this hasn’t been the problem that I face.  Perhaps because I know I have another on the way, perhaps I’m just a little more immune to that emotion, I don’t really know.  For me, what has been difficult has been to watch my child’s pain and to stand by without removing the thing I know to be causing his pain.

Being a stay-at-home Mum, I have had the luxury of being able to attend school with Gavin to help him adjust and to be there for him.  It also means I have gotten to see the extent of the childrens’ distress (not only my own child’s but those of other parents’) from being sent to school.  Through this experience, I also know that the teachers often give parents a much watered-down version of how their child coped at school that day.

“He was fussy in the morning, but he did well in the afternoon.”

In other words, he howled his lungs out in the morning and didn’t cry as much in the afternoon.

I can understand the reasons for glossing over the details because I’m sure it can’t be easy for any parent to know what their child has endured “for their own good”.  Nevertheless, it still breaks my heart to see it.  For this reason, I doubt I would ever cope as a preschool teacher.

I am sure it was largely the pregnancy hormones at play but when Gavin cried this morning, even though I was there to hold him and comfort him, I could feel the tears springing to my own eyes.  Some might say that I coddle him and that it’s time for him to grow up and deal with going to school because this is an inevitable part of life.  Well, that might be true if he were four and attending kindergarten, but he’s only two and this is playschool.

The general consensus has been that he’s anti-social and too timid for his own good, but at this age, I find this assessment to be unnecessarily harsh. Sure there are the bold and fearless two-year-olds who aren’t afraid of getting into the thick of things, but that doesn’t mean all children must be the same.  To say that their social development is stunted would be like saying all adults who are shy are delinquents. We’re talking about personality traits – there’s no right or wrong here.

Although I still stand by the reasons why I chose to send Gavin to school in the first place, I know I cannot continue to insist that Gavin attend school if I detect in any way that his distress is psychologically harming him.  It means that over the rest of this week and the next, I will have to observe several things:

1.  The Effects of Sleep


Starting school has required Gavin to sleep earlier and wake up earlier.  Unfortunately, this hasn’t been easy to adjust since since I have failed at all attempts to regularise his sleep patterns in the past.  That also means he hasn’t been getting the adequate amount of sleep that he needs.  The one thing I do know about my son is that he doesn’t tolerate fatigue very well.  Although he resists sleep and insists that he doesn’t need it, I’ve noticed his behaviour and ability to cope decreases exponentially when he’s tired.

Part of his declining ability to cope with going to school could be due to the fact that he’s been getting less and less sleep each night, despite me trying hard to regularise his sleep patterns.  I am assuming that by the end of the two weeks, we should have achieved some pattern of sleep to eliminate this factor as a cause for his inability to cope with the idea of going to school.

Although we have witnessed some changes in Gavin’s behaviour as a result of starting school, I believe that none of these are in any way detrimental to his emotional health and well-being.

The kind of behaviours I’m talking about are the type that are indicative of a deeper underlying problem.  For instance, becoming withdrawn and subdued even in his comfort zone – home – or not behaving like himself.  So far, so good. 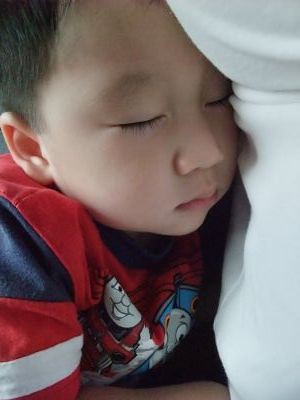