When G1 was little, he was mad about dinosaurs. One of the activities he really enjoyed was digging for dinosaur fossil. We used to use fossil digging kits back then but they were costly and messy. Perhaps because of that, we never really did this activity with G2…

Digging Dinosaurs from the Ice Age!

At school, G2’s teacher froze dinosaur figurines in water for the kids. It was such a brilliantly simple idea that I can’t believe we never tried this before! And it was a huge hit with the kids! 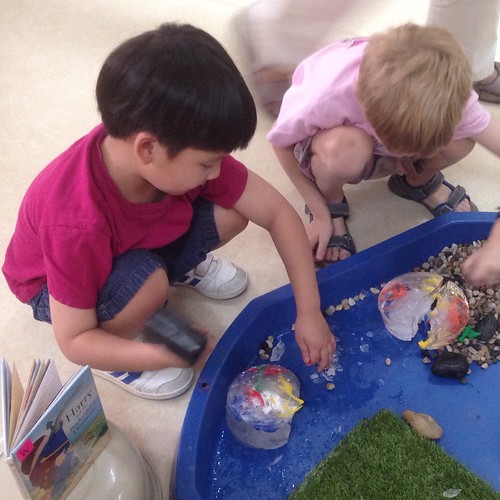 Yep. We’re going to borrow this idea for home… It never ceases to amaze me how the simplest ideas can have the most amazing effect on the kids.

It would seem that you can’t have too much of a good thing – especially when it comes to fossil hunting in ice. So we froze our prehistoric sea life Safari TOOB, and improvised with a wooden rolling pin for a mallet and a play doh knife for a chisel. Was it still fun? Oh yes, it was… 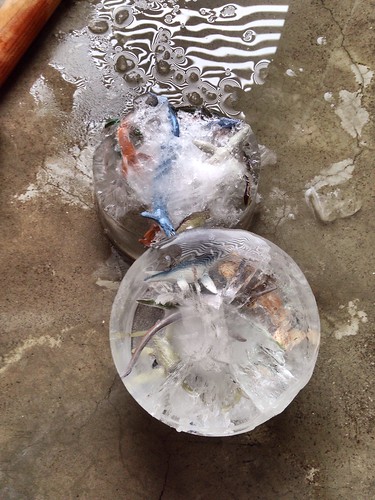 Since Gavin’s mad obsession with dinosaurs, we have tried three different dinosaur fossil excavation kits and this is what we think…

This was the first one we tried. We bought it from Toys ‘R’ Us and costs RM56.95. The plastic bones are set in plaster of Paris (I know it doesn’t look it in this picture but the one we got was definitely plaster of Paris). The problem with plaster of Paris was that it caused the bones to warp and that made the final dinosaur structure difficult to assemble because the pieces would not fit together nicely.

The tools were adequate – they had the hammer and chisel, a knife (on the back of the hammer) and a brush.

The head connected poorly to the body and the structure falls apart too easily – all you have to do is handle it and it breaks apart.

My SIL bought this for Gavin from a shop in Singapore. It cost her SGD18.90. We were a bit disappointed with this kit because we didn’t realise it only contained the skull of the dinosaur and nothing else. It’s a lot of “rock” to get through for such a tiny piece of fossil (especially if you consider that the size of the block is roughly about the same as the Edu-Science kit.

The tools are wooden, but personally, I felt they were more effective than the plastic tools from Edu-Science.

I’m not entirely sure what they used to make up the rock (it is definitely not plaster of paris, although I suspect it must be a mix of some sort). I didn’t really help Gavin with this one so I don’t know how difficult it was to break through the rock.

We found this kit in Metrojaya retailing for about RM30. I have also seen it in some branches of Toys ‘R’ Us. The size of the block is about half of the Edu-Science kit, but the finished skeleton is roughly the same size so you don’t have to suffer through as much digging for your fossils.

The plastic bones are much better made compared to the Edu-Science kit – at least you can handle the fossil without it coming apart in your hands. I didn’t notice any warping either.

The “stone” is another mixture which I felt was easier to get through compared to the plaster of paris (using the tools from SES Creative).

The tools, on the other hand, is probably the biggest disappointment in this kit. They lack the chisel so it is harder to chip away at the rock (I ended up using the wooden tools from SES Creative).

Of the three kits, I felt the kit from Kidz Labs is the best value for money. Not only is it the cheapest of the three, it is also the most complete (comes with the entire skeleton) and well-made (no warping of the plastic after being set in the “rock”). Now if it just came with a chisel, it would be perfect.

Gavin has been after the entire set for his collection of fossils. We got a T-Rex after the Brachiosaurus, and Gavin sneakily delegated the excavation to his Dad and uncle who were both only too happy to get involved (and they say I live vicariously through the kids).