Two whole days spent cooped up indoors had the boys tearing the walls down with restlessness. Thankfully, Aristotle found a myriad of ways to keep himself pleasantly occupied so all I had to deal with was the occasional bickering and Hercules’ usual mischief (like painting poop on my wall, drawing on my chair, and stuffing his Lego into our air purifier – just to name a few). 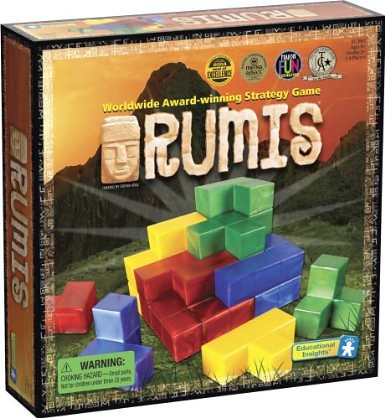 The game comes with 4 game boards and 44 Rumis blocks. There are variations in how the game can be played, but the essential idea is to construct historial Inca structures, such as the pyramid, stairs, tower, and wall. You can play solitaire or against others with up to four players. Each player takes a turn to place a piece until no one can place a piece. 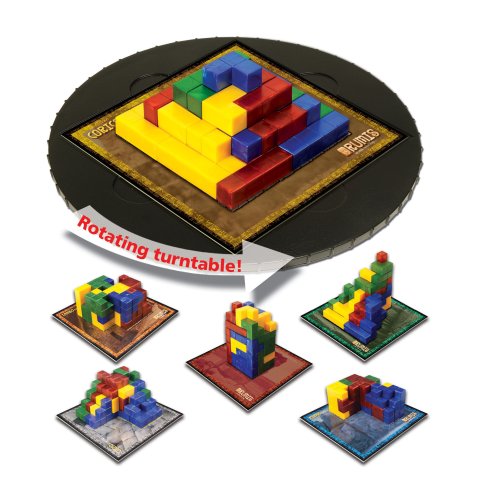 The aim of the game is to have the most number of squares occupied by your colour when looking from the top. For instance, in the game below, red has 22 squares, blue has 16, and green has 36; therefore green is the winner. 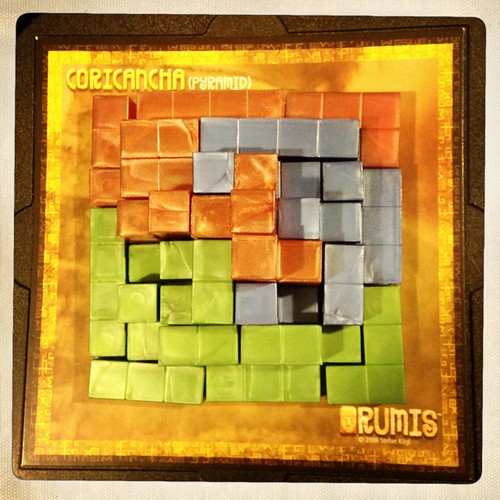 A simple concept but a fun one – Rumis is a great game for developing spatial awareness and critical thinking skills. Rumis is a Strategems brain building game created by Educational Insights.

My parents came to visit us recently and my Mum brought over some very old memories from my childhood. I didn’t even realise she kept them! 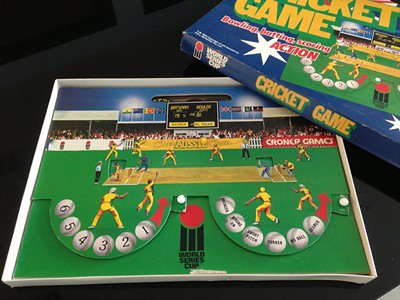 I’m not sure if you ever played with this but I doubt they make anything like it any more. Aristotle and I re-enacted a match between Australia and England recently (he was Australia and I was England). It was a close match with England losing by just 8 runs! Aristotle was really fascinated by how the game worked and was puzzling over the mechanism. Yup. They sure don’t make ’em like this any more… 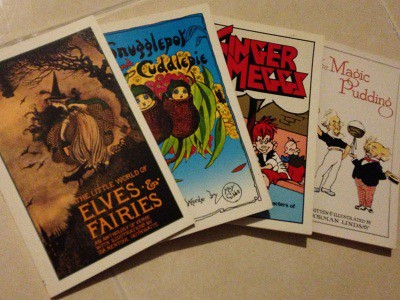 Now who remembers these?

These were a special edition series that was selling at the post office and they came with bookmarks (which I don’t have any more, unfortunately). Most of these books aren’t even in publication any more so I’m glad I still have them to introduce to Aristotle.

It was nice to be able to bring something from my childhood that you don’t get any more that I could share with my boys.

Do you have any old toys and books that aren’t easily available any more that your children are playing and reading now? Tell us about them…

Aristotle has really been enjoying his card games. When I introduced Boggle Slam, it was slow going and a bit boring so I decided to spice it up a little by modifying the rules. The new rules are essentially the same as Upwords without the board. 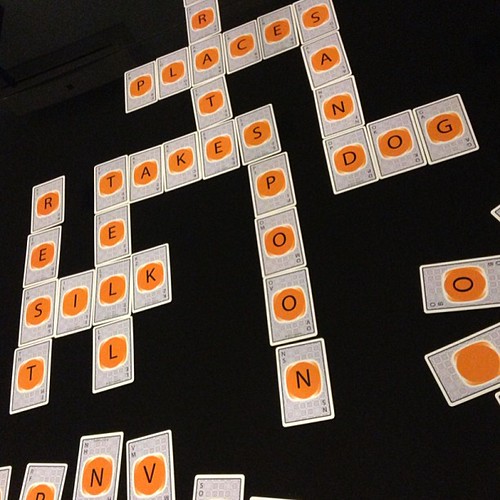 Boggle Slam Upwords is easier to play compared to Scrabble which is great for children learning to spell since they may have a limited repertoire of words and may struggle to come up with words if they only have 7 letters (as in regular scrabble). It’s a gentle introduction to Scrabble and a fun way to practice spelling.

When I was little, I loved playing the game Cluedo. Back then, it was a board game. Now, there is a card game edition which is simpler and faster to play. So when I started introducing Aristotle to the good old fashioned games of my youth, we started playing Clue – Suspect and he really enjoyed it, too.

So that we could play the game on the go, I thought I would try to find the App version. It turns out that they don’t exactly have an app version but they do have something even better.

Just like the board game, you have the 6 original suspects – Scarlet, White, Peacock, Mustard, Plum and Green. They are under suspicion for killing their host – Black. They have a variety of accessories for murder – Gloves, Rope, Candlestick, Pistol, Razor, Poison. The scene of the crime is Black’s mansion – you have to figure out which room the murder took place in.

What you have to do:

The game is an excellent and entertaining way for developing logical reasoning, analytical ability and problem solving skills. It might be a bit tricky for the younger kids (especially as you progress to the harder levels) but you can play it together. Truth be told, I think I enjoy playing the game just as much.

Update: For some reason EA Games has removed this app from the app store.

Aristotle’s school is doing a theme on toys – specifically: old-fashioned toys. You know… the kind we used to play when we were kids. So we’ve been playing a few “new” oldies ourselves…

We’ve moved off Dinosaur Chess and onto a real chessboard:

We chose a magnetic set so we could take it along with us, or “pause the game” without having to worry about the pieces falling over when we have to move the board around the house. Aristotle’s been playing against Daddy as part of their “father and son bonding” sessions now that Aristotle is growing up and reaching the second phase of his life where he looks to Daddy to emulate (Biddulph in “Raising Boys“).

The boys have been having a bit of fun with the magnetic letters on the fridge, so I was inspired to dig out the Scrabble set. It was a tad ambitious, so we cycled back a step to Scrabble Slam! to practice with our four letters words first.

Aristotle’s giving it a good go. Hercules is only interested in spelling his own name and “Mummy”. Occasionally, he might be interested to spell the titles of the other members of the family, too.

Aristotle’s really taken to his card games, so we’re going to give Clue: Suspect a go. It’s the card deck version of the board game Cluedo which I really enjoyed playing as a child. I thought it was interesting to see that quite a number of board games from my childhood have turned into card games. We have Battleship, Monopoly, Sorry! Revenge, Pictionary, and loads more. Of course there are also the golden oldies, like Top Trumps, Uno (which comes in many different themes to delight any young fan), Old Maid, Go Fish!, and who could forget Snap!? Most of these games can be played with a regular deck of cards – that’s what we did. In our version of Uno, 10’s were “change the suit”, 7’s were “reverse”, Aces were “skip”, and 2’s were “pick up 2”.

Recently, Aristotle’s aunt bought him a new board game called Snake Lake and it reminded me that Aristotle’s getting into that fun age where he’s old enough to understand how to play a lot of the board games now. Of course, Hercules is still our limiting factor because he’ll want to “play”, too, and that usually means we can’t play.

Since we’re on to “old fashioned” games… Another one we still play is “hide and seek”. Now tell me a child who doesn’t love “hide and seek”? Of course, Hercules still hasn’t quite mastered the art of hiding well because he gives himself away every time! Sometimes, we make it interesting by hiding a special object and give “hotter”/”colder” clues. If we’re feeling really creative, we make a map and play the treasure hunt game.

Another game I’d like to dig up from my childhood and introduce to the boys is Twister. Now there’s an idea for a party game…

Sometime back, we were looking for Geography apps like the old Carmen Sandiego Game. Recently, we stumbled on a free app by Scholastic called The 39 Clues – Vesper Hunt. It is a game that is part of the Scholastic book series with the same title – The 39 Clues and can be played online or via the app.

The 39 Clues is very reminiscent to the old Where in the World is Carmen Sandiego game. This time, you’re a member of a powerful family called the Cahills. Your mission is to track down the Vespers – your enemy – and stop them from destroying your family. Using your logic, your knowledge of geography, and by working through puzzles, you can track down the Vesper suspects and foil their fiendish plots.

The puzzle games are the unique twist to this game that is different from the original Carmen Sandiego game. The 39 Clues includes 3 puzzle games:

Start out by focusing on the pieces along the edges. Once you have these pieces in place, you can move to the interior. Every piece will connect — there are no dead ends.

Begin by quickly tapping a number of the circuits. You will probably find one or two matches that way. Then, you can focus on making more strategic guesses.

Tap or click on an empty space next to the highlighted square. Focus on finding each of the pieces one at a time. If you make a mistake, just start over — you should have plenty of time to get it right.

The rest of it is pretty much the same – you are given geographical clues which will tell you what city you need to travel to next. For instance, suspect bought opera tickets and one of your next destination options is Sydney. You will also receive a clue about your suspect – gender, hair colour, interests, talents, or trademark – which you will have to use to help you narrow down the suspects so you know which Vesper you are after.

Aside from teaching your child geography, younger children will learn to deduce what the clues suggest about the suspect. For example, suspect was bragging about high scores which suggests an interest in video games. Another example might be suspect bought a wig which suggests the suspect’s talent is in disguises.

When travelling from one city to another, you are also shown some interesting facts about the country as well as a map depicting where the cities are relative to each other.

It is a really fun way to learn geography – which I can personally vouch for because I learned my capital cities playing Carmen Sandiego and was the only kid in my class who knew the capital city of Egypt at that time. I can’t really say geography was a favourite subject of mine either. Aristotle, who has yet to show any inkling of interest in geography, was quick to seize this app and has since been piecing together his geographical knowledge on various countries around the world. Best of all, it’s free.

And now that he’s familiar with the game, The 39 Clues, Aristotle might pick up on the book series, too. I have found that Aristotle needs a little push when it comes to new books. He loves his old books enough (he keeps re-reading them) but starting a new series is always a challenge. Until he “knows” it, he doesn’t really want to read it. I’ve had to come up with all manner of tricks to get him started on something new and then allow his curiosity to take him the rest of the way.

But I digress… You can play The 39 Clues – Vesper Hunt here: