When I was approaching the end of my high school years, my Uncle tried to give me some careers counselling advice.  Except that I don’t think it was advice so much as it was more like him telling me what I should do.  So what did he tell me to do?  Become a teacher.

Yes, well.  Here’s the reason why I could never become a teacher: I have no patience.  None.  Zero.  If a student had difficulties understanding my lesson, I’d probably have to bite my tongue and tie my hands to keep from flinging a pencil case at him and screaming out obscenities regarding his intellect.

Almost reminds me of a teacher I once knew in highschool.  Whenever a student had the audacity to tell her he didn’t understand, she would say with increasing volume not unlike the crescendo in a piece of music, “You don’t understand? You Don’t Understand??  YOU DON’T UNDERSTAND???”  After which, no sane student would dare say they didn’t understand, but meekly return to his seat and keep his head bowed low.  Yeah, she was probably in the wrong vocation, too.

Well, lately, after observing my efforts to homeschool Gavin, my MIL told the hubby, “If your wife is so interested to teach, why doesn’t she take a course and learn to teach then she can give lessons at a kindergarten or something.”

To which hubby laughed and replied, “She’s interested to teach our son, not other people’s children.”

Actually, I think it would be more correct to say that I feel responsible for my son’s education which is why I take the effort to homeschool him.  Quite frankly, it worries me that there are people out there teaching with my very limited patience and who are about as enthusiastic about teaching as a giraffe is about jumping through hoops. Given how important it is to lay the foundations right as early as possible, I guess I’m not willing to take a chance on someone else in the hopes that they get it right because they don’t have the kind of vested interest I have in the development of my child.

That doesn’t mean I haven’t wanted to run up against a wall and fling my head at it because I have.  The only thing that keeps me going is the fact that my one and only student is my son and well, everyone knows that it’s always different when it’s your own child.  It is also times like these that I really appreciate the educators in the world because I realise how tough a job it really is.  If I can be at my wits end with just one student, who is my own child to boot, I can’t imagine how teachers might feel with a classroom full of students with no relationship to themselves.

For instance, I bought these Kumon books for Gavin which he really enjoyed doing at the start.  He was particularly good at the Mazes and I was rather surprised that he would navigate the maze without having to study it.  After a while, I noticed his behaviour had changed.  He began to run down the dead ends which confused me for a while until I realised he was having me on. 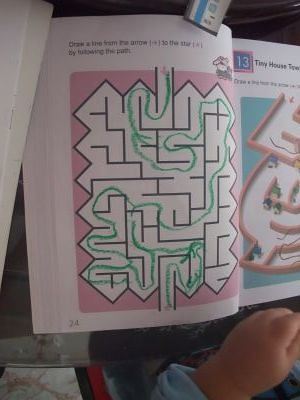 My son finds it amusing to frustrate his teacher by acting “dumb”.  He would deliberately draw a line to a dead end and say, “Dead end!”  Then he would look up at me with a little smirk on his face.  This isn’t the first time he’s pretended he can’t do something.  He does it with his jigsaw puzzles, reading the time or even with simple things I know he can do because I’ve seen him do it.  For instance, he can slip a note into the coin slot of his piggy bank by himself but sometimes he’ll insist he can’t do it without my help.  Other times he’ll deliberately misread colours despite the fact that he’s known his colours even before he turned two.

It makes me wonder how he’ll manage in class because if he keeps up this behaviour his teacher is likely to either get annoyed at him for playing around or she’s going to think he’s stupid.  Even I have underestimated him at times, thinking him incapable of specific activities because he pretends he can’t do them.  It is only when I spy him doing them from a distance that I realise I’ve been had – I confess the discovery of which annoys me to no end.

Sometimes he would just scribble over the maze, draw a line outside the maze from the start to the finish or a straight line cutting across all the “walls” of the maze.  Sometimes I want to correct him for breaking the rules, but other times, I try not to because it shows he’s thinking outside the box.  I never said he couldn’t go around the maze, neither did I say he couldn’t cut across the lines.  All I said was get from the arrow to the star.

While I want him to learn that there are ways that certain things must be done, I don’t want to squash his creativity in thinking beyond the problem.  Although there are some things that do need to be rote learned, I don’t want rote learning to override his ability to think for himself.  Perhaps I’m thinking too hard, but right at this point, I’m not very sure how to do that.

So yes, a teacher, especially one who can remain fired up about teaching despite having some pretty hair-raising students, ought to be commended with the highest award.

If you’re a teacher or a homeschooling parent, please share your experiences on how you manage these situations with your children.  I welcome any feedback.  I knew it was difficult to teach, but I never thought I’d want to tear up all the books and throw the pencils on the floor in the process.

Since we’re into the early days of my homeschooling experience with Gavin, I thought I should keep up the practice of reviewing the activities we did in the previous week so that I may better learn from them and improve upon my “curriculum” for future weeks.  My original plan was to run a timetable with one main activity a day following the following subjects:

With other miscellaneous subjects in between.

However, week two was no ordinary week, beginning with a public holiday on Monday.  Hubby was working so we took a trip up to the factory to visit him for lunch.  Then I had some errands to run on Tuesday so we ended up in Sunway Pyramid.  On Wednesday, I took Gavin on an excursion to the Planetarium and the KLCC art gallery.  After the disappointing visit to the Planetarium, I decided to take Gavin to the National Science Center on Thursday where we had lots of fun learning about science (I’ll write more about this in a later post with pictures to boot).  Then on Friday to Sunday, we were down in Singapore visiting my BFF, brother and SIL.

Upon reflection, it was an extremely busy week.  Though we didn’t cover the usual subjects, I thought it was pretty educational in its own right.  I guess that’s one of the benefits of homeschooling – being able to take things on the fly and turn each activity into its own unique learning experience.  I guess that’s the thing to remember regardless whether you’re a home schooling Mum or if you send your children to formal classes – the lessons don’t have to end when “class” is over, they can continue on the road in the car, while we’re out shopping, or during dinner at a restaurant.  Just about any experience is educational, the value of which depends on how you capitalise upon it. 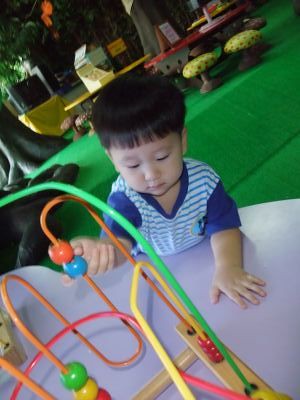