In Heguru class, there are two types of link memory activities – Peg Memory and Linking Memory.

What is Peg Memory?

Peg Memory is another important right brain activity that helps to develop the memory. You may already be familiar with Peg Memory as it is a common system used to help recall lists of items. If not, here it is in a nutshell:

“Peg Memory is a memory system for remember a list of items that must be recalled in a particular order. It works by associating each item in your list to a number “peg” so that you not only remember the items in your list but also the order.”

For more information on Peg Memory, read the following articles:

To help you with your home practice, download our Peg Memory chart from 1 to 100:

What is Linking Memory?

Linking Memory is another memory system that facilitates the memorisation of a list of things. It works by linking one object in the list with another, then the other object is linked to another, and so on, and so on until all the items in the list are linked together. Read more about the linking memory activity:

Due to certain similarities between the two systems, linking memory can be confused with the Peg Memory system. To understand the differences between Linking Memory and Peg Memory, please refer to the following article:

There are several ways to practice Linking Memory. One way is to use the same story sequence repeatedly until the child remembers the images in sequence. Another way is to vary the sequence of images and to change the images each time the activity is practiced. Both methods have their merits and both methods provide their own benefits. I believe that both methods should be followed as part of your regular right brain home practice.

If you are wondering how you practice Linking Memory with very young children, the following article may be helpful. It is also a variation to linking memory practice that older children can follow:

This is a follow-up to a previous post on Right Brain Education Activities for Young Children.

For children below 3 years, the focus is mainly on input and less on output, therefore most of the activities done with young children are mostly observation-type. In Heguru, the general recommendation for home practice is reading and flash cards, then memory work. The first two are fairly straight-forward.

Memory work for under 3s depend largely on their ability to take instruction and to articulate themselves. Since most children are still developing speech, it can be difficult to do activities like linking memory. Even if they have some speech, the effort of articulation may detract from the child’s participation of the activity. Therefore, I find the following recommended activity to be a good one for very young children.

If you are unfamiliar with the linking memory activity, read the instructions here.

If 3 cards are too easy, increase to 4 cards. Continue to build up the number of cards used in the story until your child is struggling to remember where each image is.

Remember, younger children generally have short attention spans so it is best to limit the activity. Play only when your child is happy and having fun. The focus of right brain education for young children is input. This activity would be considered output because you are expecting your child to give you an answer. Therefore, if your two year old is distinterested in practicing linking memory, I would leave it and focus more on reading books and speed flash cards.

This variation of linking memory is also a good alternative to play with an older child as it helps to develop memory function by recalling where the cards are at random rather than having to rely on the story to determine which card appears next. If you read my post on 5 Ways to Maximise Your Child’s Cognitive Potential you may recall that novelty and new challenges are a great way to further develop the brain. Trying to remember the cards randomly presents a different memory challenge for your child.

Unfortunately, the random linking memory activity requires me to prepare a new story for Gavin the night before and well, I’ve already confessed to being a lazy Mom, so I have been trying to find an easier way. This is version 1 of my “easier way”:

In retrospect, I’m not sure that this deck will be useful for practicing linking memory on the computer because it is very slow to load and may possibly crash a system that isn’t up for it – it was bad enough trying to work on the file! But if you have a powerful computer and if you can find a powerpoint shuffler, this deck will save you a lot of preparation time. All you have to do is shuffle the cards and you’re good to go.

Otherwise, you can print out the pictures (you can print as many as 9 slides to a page if you want to make them smaller and conserve paper) and use them as physical linking memory cards.

While I was thinking of how to decrease the size of my file, I thought of using a deck of linking memory cards with words instead of pictures. The idea of linking memory is to use your imagination to help you remember the items so you don’t really need the pictures. For instance, if you had to remember a shopping list – bread, noodles, yoghurt, insect repellent, and detergent – you could make up the following story:

The bread was hungry so it decided to cook up a packet of noodles but the noodles were so dirty that it had to be washed with detergent. The detergent was all covered with yoghurt which was attracting the insect repellent.

You would create mental images of a loaf of bread with a big mouth standing by the stove cooking up a packet of noodles. Then imagine that the noodles are covered with dirt and you’re sprinkling detergent over it. A big blob of yoghurt falls onto the detergent and a can of insect repellent with wings is hovering nearby. You wouldn’t really need a deck of linking memory cards with pictures to create this story in your head so word cards would work just as well as picture cards.

The other benefit of using word cards is that it can be a rather sly and devious method for testing your child’s reading ability. You don’t necessarily have to ask your child what the word says, but if you child gets excited about making up the story, he may get ahead of you and read the next word before you can tell him what it says. This is just another opportunity for your child to demonstrate what he has learned – only if he wants to, of course. 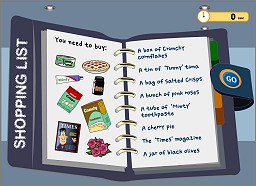 A reader recently enquired where she could obtain more linking memory exercises. While surfing one day, I stumbled across a pretty cool game online called the Shopping List Memory Game (it’s free!) which can be used in a similar way to the linking memory exercise. In the game, you are given a list of items with their pictures that you need to remember. Once you’ve memorised them, you are sent to the grocery store where you have to pick up all the items on your list from memory. As the game level increases, the more items you have to remember on your list.

In this game, you are encouraged to memorise the list using the linking memory technique. They also provide an example of how to use the linking memory method to recall all the items on your grocery list.  I particularly like their explanation of how linking memory works because there is not a lot of clarity given on this topic.

To make sure you can remember all the items through linking memory, you should make your linking story as crazy as possible – the sillier and more unusual, the better, because it is the extraordinary that will make it easier for you to remember. For example, if you were trying to remember socks and soap, instead of imagining a pair of socks being washed with soap (which is actually very common occurrence), you should imagine a soap with legs trying to wear a pair of socks. Because it is so ridiculous, it becomes much more memorable.

For more linking memory resources, check these out: 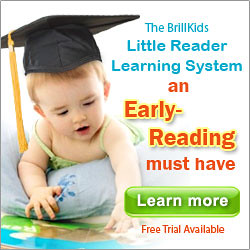 In Heguru, they have a linking memory activity which I call “Random Linking Memory“. Unlike the Shichida linking memory program, the story and picture cards change each week so there is a brand new sequence of picture cards to remember at each lesson. You can practice the Random Linking Memory exercise by using your own series of linking memory cards. One way of creating your own cards is to recycle the flash cards you use for your child’s speed play flash card activities. However, these cards can sometimes be large and cumbersome. Alternatively, you can make your own set of Linking Memory Cards using the following template:

Just print them out onto cardboard paper, cut them out, and you are ready to go.

How to Use the Cards:

In right brain education, there are three different type of linking memory exercises:

To learn more about each exercise, please click on the links to read the articles.

In Shichida, the aim of sequential linking memory is to be able to recall 1000 images in order.

Read this article on linking memory to learn how to use these cards.

You can also use the following Linking Memory App for iPhone/iPad if you want more exercises for practicing random linking memor.

You will need BrillKids Little Reader Software to use these flash cards.