Although there was a lot of protest when I said I was going to tandem breastfeed my two boys, it was pretty much accepted and I went on to nurse Gavin even after Gareth was born.  However, with Gavin’s declining behaviour in recent times, the discussion for me to wean Gavin has been revisited.

Here are some of the arguments why I should have weaned him:

Here are my thoughts on the matter:

Who’s to say that had I weaned him he wouldn’t be “sticky” to me right now?  And who’s to say that weaning him would have had any effect on his current behaviour.  For all we know, he could be even worse than he is right now.  And if I had weaned him, he may have felt even more jealous of his brother’s nursing time.  My friend who did not breastfeed her daughter also found her daughter to become more demanding and more “sticky” after she had her second child.  Her daughter also displayed all the classical signs of sibling rivalry.

The fact is, our toddler’s world has turned upside-down when his baby brother was born.  How can we not expect him to react to it?

Now here are the reasons why I am glad I am still nursing Gavin:

So please tell me again why I should wean him?

Okay, nothing new here for me except some rather interesting developments from Gavin’s point of view…

As I mentioned earlier, I was going to continue nursing Gavin through the pregnancy unless he decided weaned himself and I have been.  Well, I have continued nursing him and Gavin hasn’t shown any indication of wanting to wean.  Although he has increased his intake of other fluids – most especially milk and water at night – he still asks for the breast straight after.  Sometimes I am able to get him back to sleep without having to nurse him, other times, he still needs to suckle to get back to sleep.  I’ll usually let him decide and follow his lead.

Recently, something happened and I haven’t quite figured out what to make of it.  Gavin woke up in the middle of the night and I offered him milk.  After drinking the milk, he seemed ready to fall back to sleep.  Then, to my surprise, he started crying.  His eyes were closed so I wasn’t sure if he was awake or asleep.

Gavin continued crying and saying, “I don’t like nen nen, I don’t want nen nen any more.”  He kept saying it over and over while crying.  I tried to calm and said he didn’t have to have it if he didn’t want it, but he just kept crying.  Finally, I took a different approach and asked if he wanted nen nen.  To my surprise, he nodded.  I offered him my breast and he fell asleep almost immediately after latching on.

Since then, there have been a second incident when Gavin told me quite specifically that he didn’t want nen nen any more.  However, the strange thing is that he seems quite ambivalent about it.  Although he insists he doesn’t want it, everything about his actions still indicates he wants it.  And if I offer him my breast, he’ll take it.

Being new to this whole nursing during pregnancy experience and personally knowing only one other mother who has done this before me, I haven’t got much to go on regarding the whole psychology of how this is affecting Gavin.  Clearly he seems upset by the changes in my milk production, but yet reluctant to give it nursing completely.

Although I know my milk production has decreased in quantity from the fact that Gavin gulps down milk in the middle of the night like a traveler drinking water in the Sahara desert, I think something else has changed recently.  Very likely, my breasts have shifted from milk production to colostrum which is something that is supposed to happen around about the fifth month of pregnancy – or so I read somewhere.  Perhaps that is what has been bothering Gavin?

During the first trimester, nursing Gavin was a little sensitive, but hardly what I would describe as within the realm of pain.  Lately, however, nursing has begun to hurt a little more.  Gavin also seems to be making a nasty habit of biting my nipple in his sleep.  I suspect this frustration must be due to the lack of breast milk and the difficulty of extracting the colostrum.

I’m still trying to figure out how to deal with this information and what I can do to lessen the emotional disturbance it seems to be giving Gavin.  I have asked him if he wants to stop nursing and he doesn’t.  I don’t want to wean him because it seems he still really wants the comfort of nursing.  I guess, we’ll just keep going and see what else develops.

In the meantime, if you’re a mother who has breastfed a toddler through your pregnancy, feel free to share your experiences in the comments below.  I think I could do with some additional thoughts on the matter right about now.  This isn’t exactly the sort of information that is easy to google. 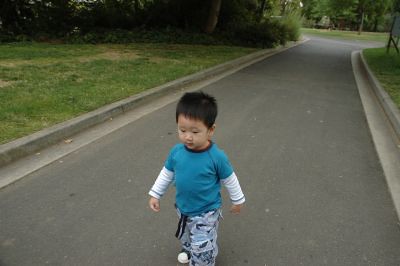 Okay, I promised an update on this topic…

My reasons for continuing to nurse Gavin throughout the pregnancy and for tandem nursing (nursing an older child while nursing a baby):

My concerns about continuing to nurse Gavin during the pregnancy:

KellyMom has always been a great source of information for nursing mothers, and this is what they have to say about the safety of nursing during pregnancy:

“Is it safe to nurse during pregnancy?

Yes, in most cases. At this time no medical study has been done on the safety of breastfeeding during pregnancy so it is impossible to list any definitive contraindications. If you are having a complicated pregnancy, such as lost weight, bleeding, or signs of preterm labor, you should problem-solve your individual situation with your caregiver.”

“Although uterine contractions are experienced during breastfeeding, they are a normal part of pregnancy. Similar contractions often occur during sexual intercourse, which many couples continue throughout pregnancy.”

During pregnancy, several things need to be noted:

So the uterus is very well protected during pregnancy and guards well against oxytocin that may be released during nursing.

What about miscarriage and preterm labor risks?

“A recent review of research on the pregnant uterus reveals that there is actually no theoretical basis for the common concern that breastfeeding can lead to miscarriage or preterm labor in healthy pregnancies. Instead the uterus has many safeguards preventing a strong reaction to the oxytocin that breastfeeding releases.”

What do the Experts have to say?

Lesley Regan, PhD, MD, who is the head of the Miscarriage Clinic at St. Mary’s Hospital in London, finds it surprising to hear issues related to miscarriage to be reasons for weaning.  “Once a pregnancy is clinically detectable, breastfeeding should pose no added risk of pregnancy loss. There isn’t any data suggesting a link between breastfeeding and miscarriage, and I see no plausible reason for there to be a link.”

More information on the safety of breastfeeding during pregnancy.

I’ve also been reading the comments of mothers who have nursed throughout pregnancy and there appears to be no issue here.  Some have even been high risk pregnancies and the mothers have managed to continue nursing throughout the pregnancy without consequence (although whether you should in such a case is really a matter between yourself and your obstetrician).

Will I continue to nurse Gavin throughout the pregnancy?  Yes, I think I will (unless he chooses to wean or if I succumb to the pain of it).