The City of Light

In the City of Light you can learn about:

See also: Bobo Explores Light (which is another really cool app on the properties of light)

The Island of Movement and Sound

On the Island of Movement and Sound, you can learn about:

The Island of Heat and Cold

On the Island of Heat and Cold, you will take a tour to visit an ice-factory and a railroad crossing, and learn interesting facts about:

The Island of Mechanics and Energy

In the Island of Mechanics and Energy, you will learn about: 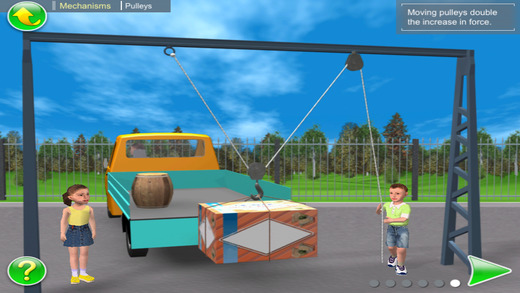 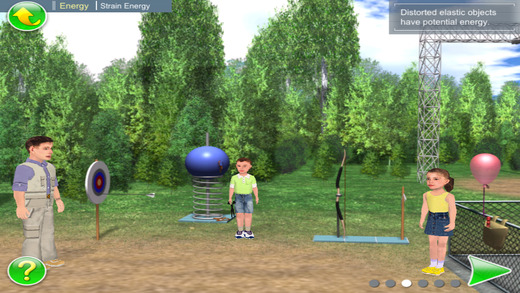 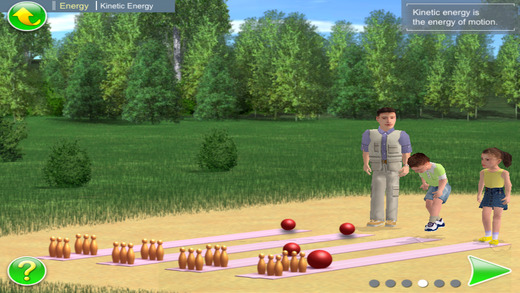 Educational apps are a dime a dozen. Cleverly designed educational apps that feel more like fun than learning are not so easy to come by. Simple Physics is one of those apps that belong in this rare latter category…

Simple Physics is a fun app that tasks you to play the engineer and design physical structures. 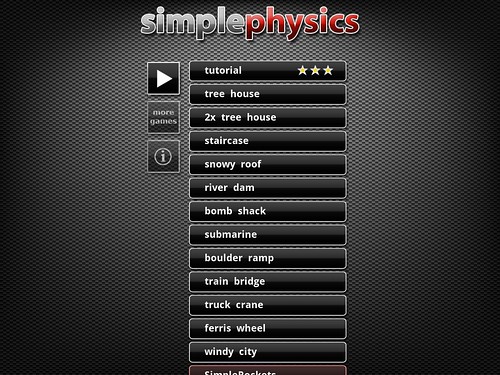 In each level, you will be given a set of requirements that you need to meet – e.g. construct a tree house capable of holding 4 children weighing 50 pounds each for 10 seconds. You will be given a budget to meet so the more complex your design, the more expensive it is, and the less likely you are to meet your budget requirements. The philosophy of Simple Physics is this: “An engineer is someone who can do for a dime what any fool can do for a dollar.” 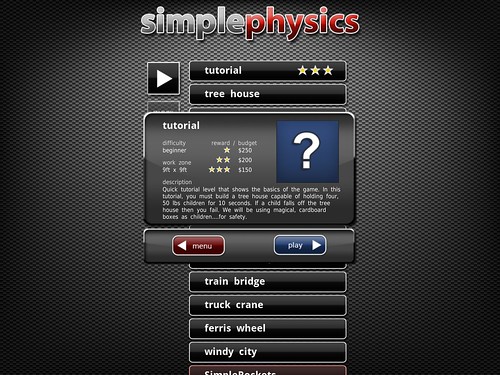 Design your structure with a blue-print. 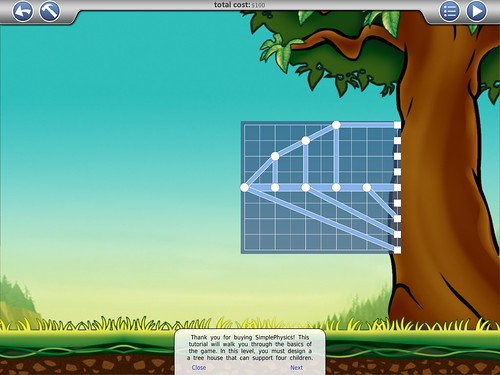 When you’re satisfied with the design, test it out to see if it will hold.

“While testing, you can see how the strain is distributed across your design. Areas that are under immense strain are colored bright red, while other areas are colored green. This allows you to find and fix problem areas in your design.

The finger test lets you use your finger to push and pull on your design. You can use this with pinpoint accuracy, or you can just smash your design to smithereens. The finger test has an explosive new twist. You can now create explosions by tapping the screen for ultimate annihilation.

The newly added Bomb Shack level includes a dummy with full support for ragdoll physics. Throw him around, blow him up, and smash him against your design.

The slow motion feature lets you slow things down so you can see how your design is failing, and it is also incredibly fun to watch explosions destroying your design in slow motion.” 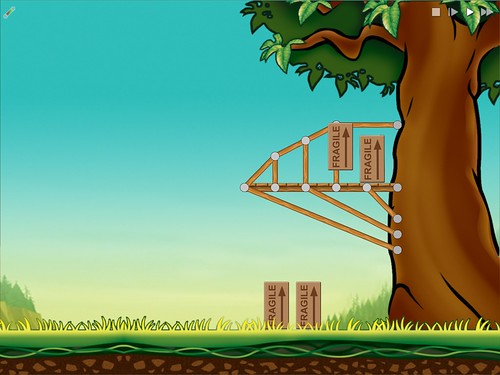 Get 3 stars for the level when you successfully design a structure that meets the requirements and the budget.

If you ever wanted to encourage that budding engineer of yours, this is a great app to have. It’s like an engineering virtual reality where your child will get to test out all her inventions so she can see how well her designs work and how to improve them.

Aristotle was working on this app when Daddy looked over his should to see what he was up to. The next thing I know… Daddy is playing and Aristotle is watching over his shoulder. After we sent the boys to sleep, Daddy is still playing.

So now I’ll have to add a disclaimer: This app is highly addictive. You have been warned.

Ah Kong (grandpa) saw Daddy playing this app and now he’s addicted to it, too…

Simple Physics is created by Jundroo who have other similar engineering games apps:

These are also available on Google Play for Androids.

I confess I wasn’t crazy about Amazing Alex when Aristotle first told me he wanted to download this app. I eventually let him “buy” it using his pocket money as a reward. Now that I’ve had a chance to watch the game in action and play a little of it myself, I think it’s a really great app for teaching children about problem solving and the physics of motion.

In a nutshell, the game is about arranging random objects so that they create a chain reaction to achieve a specific goal. The goal might be to pop a balloon, or to catch the balls in a basket.

What I liked best about this game is that there are different ways to achieve the goal so you don’t have to get the “one” right answer. I think it is important for children to learn that there are many ways to solve a problem if you can think up the solutions.

There is also a “create your own level” function in the game which I think is great for teaching young children about “action-reaction” and the physics of motion.

Here’s what they say about the app…

Meet Amazing Alex! This whiz kid has a boundless imagination and a houseful of fun toys that can turn anything into an adventure!

From cleaning up his room to battling cardboard robots in his backyard, Alex creates amazing chain reactions to get the job done with the maximum amount of fun! Now he has some challenges for you — and he wants to see the most creative solutions YOU can create!

With 100 challenging levels across four fun-filled locations, there’s a whole world of creations to explore!

PLAY AND CREATE YOUR OWN SOLUTIONS

Set the objects up to bounce, pop, ricochet, bash, and crash into each other and create an elaborate Rube Goldberg device! With a houseful of toys to play with, there’s more than one right answer! Share your most creative solutions with your friends and see what they came up with!

Got a great idea for a level? Design intriguing new levels using 35 interactive objects and share them — with friends or with the whole world! With other fans constantly creating and uploading new levels, there are always new challenges to check out!

Watch the game in action.

Amazing Alex is created by Rovio Entertainment Ltd (the creators of Angry Birds). It is available for iPhone for $0.99 and in HD for iPad for $2.99.

Some time back (probably about a year or two – I forget now), hubby got a touchscreen for his desktop at work. It was pretty cool because he had the Microsoft Touch Pack for Windows 7 on it, which has:

If you haven’t seen it yet, you should check out this demo to see how cool it is:

Okay, I’m digressing… What caught my attention was the Blackboard Physics game. Watch it here:

Although this game is probably too advanced for Aristotle, I figured it was a good one we could work on together to teach him about finding solutions to problems.

When we got the iPad, I tried to find a similar game but was unsuccessful so I forgot all about it until Aristotle was playing another game with a similar concept on a borrowed Galaxy Note. The game is called Crayon Physics (and yes, it’s available for the iPhone, too) and it looks like this:

After discovering Crayon Physics for the iPhone, I found an iPhone equivalent for Blackboard Physics – TapuGon Gravity:

The game is slightly different but the concept is still the same. Other similar games:

Aim of the game: Get the wheel to the star by drawing shapes with a crayon that come to life. These shapes will interact with the wheel following the laws of physics so tap into your knowledge of motion to win the game.

If you enjoyed Touch Physics, this sequel will offer you a whole new 50 levels of fun.

Can you design a bridge to support the weight of passing vehicles? It’s time to put your engineering skills to the test!

In this wacky physics golf game, the aim is to get the ball into the hole in as few shots as possible. But beware! It is not as easy as it seems – you will have to avoid many obstacles along the way as you use a variety of tools, like dynamite, rockets and crayons to achieve your task.

In this doodle-style physics game, you have to get the seeds back into the pots using a little bit of ingenuity and creativity.

What I like about these games is that they promote creative thinking and problem solving skills. Most of these games might be too advanced for younger children (especially once they get past the easier levels), but perhaps we’ll be able to find something with a similar concept that is more appropriate for the younger children. Anyone seen anything? Hope you can share your apps in the comments section – thanks!