While I’m not aversed to my children using technology, I do believe in moderation. In the past, I usually set “screen-time-detoxes” where there is a blanket ban on screens and I usually help the boys along by offering screen-free activities to keep them occupied. This time I tasked G1 to find his own ways to occupy himself without the screen. I was also curious to see if he could set his own limits if I gave him the chance so I didn’t set a blanket ban on screen time. I just told him why he needed time away from it and I left him to make his own choices about how to spend his time. Here’s what he came up with…

G1 has been keeping a sketch book… 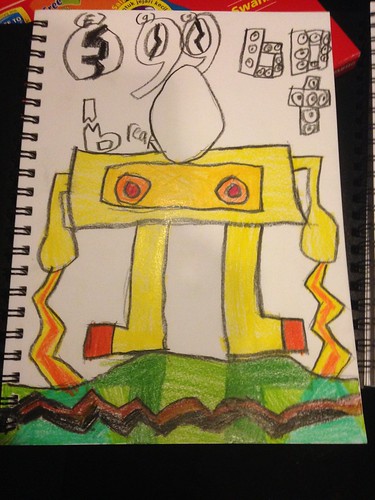 And recently, he started a series on the Lego Mixels… 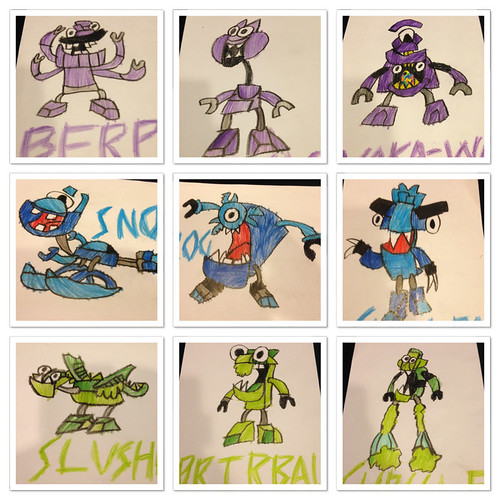 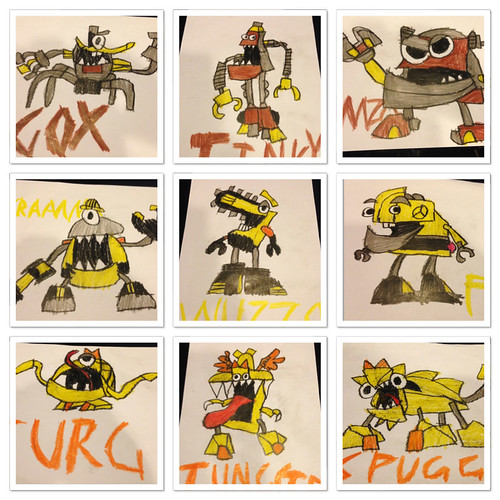 He finally managed to put away his novels (he’s recently discovered Percy Jackson) so he could start on a new story about the Lego Mixels and he’s been jotting down ideas in his Dream Diary. He says the Mixel sketches (pictured above) will be for his new book.

After playing a few board games, he was inspired to get working on his own game… 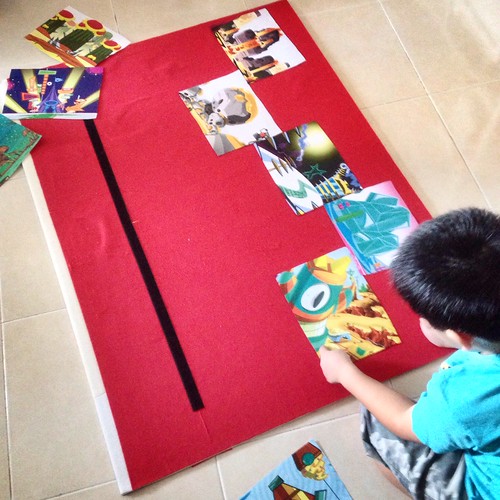 Now that G1 has proven himself to be independent of the iPad, it’s time to put G2 to the test. Now that one will be interesting…

“The truly creative changes and the big shifts occur right at the edge of chaos.” Dr Robert Bilder, a psychiatry and psychology professor at UCLA’s Semel Institute for Neuroscience and Human Behavior.

We had an unwitting experiment in “free play” that brought about some rather interesting results. After a continuous string of misbehaviours, I got fed up and banned ALL screen time – no iPad, no TV, no computer – not even for homework. The ban was pretty painful for me as well because we had to endure visits to my grandfather’s and my in laws’ homes without any form of screen entertainment – which is usually my currency for securing their “good” behaviour.

There were initially numerous complaints of “I’m bored” which I silenced with the promise of a longer screen ban. Then there was a continuously spate of bickering between the brothers as they blamed each other for their “screen-ban” predicament so I told them that they were in this together and if I witnessed behaviours I liked, I might remove the extra days of screen ban, but if I saw behaviours I didn’t like, I would add more days on. I also added that blaming each other was not a behaviour I liked… 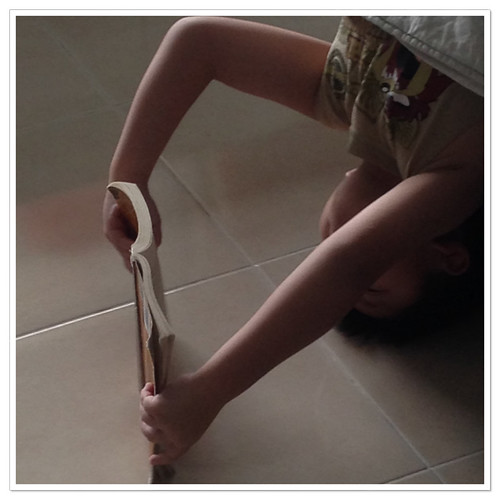 The screen-ban wasn’t quite as hard on G1 as it was for G2 because G1 can read for an entire day without getting bored. G2 eventually gets fidgety and then he starts to look for something else to do. That something else sometimes involves annoying his older brother which will start off another round of bickering. Occasionally, G2 digs out old toys to entertain himself and G1 decides that he must have the toy his brother is playing like right now! And we’re back to bickering – again. 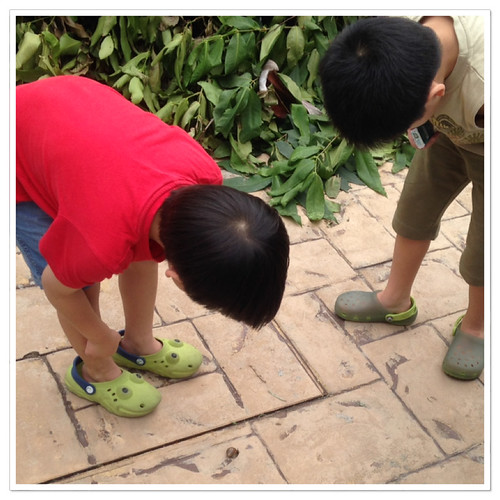 It isn’t all bad, though. There are moments of harmony – like when they discovered a snail shell and were waiting for the snail to come out of its shell again – although these moments are rather infrequent and far too fleeting for me to derive any peace from them.

By the end of day two of their total screen ban, I witnessed something very satisfying – an emergence of creativity and imagination in their free play. They were at their grandparents’ house where I stubbornly held my ground against the “TV time” that they normally enjoyed. After a rocky start, the boys started re-enacting their own modified version of Gandalf the Grey vs the Balrog with some Harry Potter spells thrown into the mix. The only “toys” they had were the pillows and cushions that they used as their “weapons”.

It made me think of an article I read recently – “Free Play: Simple Items More Fun For Children” – and I wondered if, with all their easy access to toys in this age, we are somehow discouraging the development of true creative and imaginative play in our children. Have we made it too easy for them to find entertainment that they no longer have to come up with creative and imaginative ideas for play? I wonder…

Although it was nice to see that my boys are still in possession of the ability for imaginative free play, it was slightly troubling that it took them two whole days of screen detox to get there. Does it mean we need a sufficient duration of screen-deprivation in order to elicit this kind of uninhibited free play? What would that mean for the days when they are allowed to have their screen-time? More fodder for the mind…

See Also: “We’re ruining our kids with Minecraft: The case for unstructured play

“most kids today are unprepared to play with open-ended toys, and are largely unable to play without assistance from either their parents or the toy itself”

“children have to experience boredom before they will experience the instinct to play with a toy like blocks. If we want our kids to relearn how to play, we have to begin by exposing them to boredom.”

Aristotle’s school is doing a theme on toys – specifically: old-fashioned toys. You know… the kind we used to play when we were kids. So we’ve been playing a few “new” oldies ourselves…

We’ve moved off Dinosaur Chess and onto a real chessboard:

We chose a magnetic set so we could take it along with us, or “pause the game” without having to worry about the pieces falling over when we have to move the board around the house. Aristotle’s been playing against Daddy as part of their “father and son bonding” sessions now that Aristotle is growing up and reaching the second phase of his life where he looks to Daddy to emulate (Biddulph in “Raising Boys“).

The boys have been having a bit of fun with the magnetic letters on the fridge, so I was inspired to dig out the Scrabble set. It was a tad ambitious, so we cycled back a step to Scrabble Slam! to practice with our four letters words first.

Aristotle’s giving it a good go. Hercules is only interested in spelling his own name and “Mummy”. Occasionally, he might be interested to spell the titles of the other members of the family, too.

Aristotle’s really taken to his card games, so we’re going to give Clue: Suspect a go. It’s the card deck version of the board game Cluedo which I really enjoyed playing as a child. I thought it was interesting to see that quite a number of board games from my childhood have turned into card games. We have Battleship, Monopoly, Sorry! Revenge, Pictionary, and loads more. Of course there are also the golden oldies, like Top Trumps, Uno (which comes in many different themes to delight any young fan), Old Maid, Go Fish!, and who could forget Snap!? Most of these games can be played with a regular deck of cards – that’s what we did. In our version of Uno, 10’s were “change the suit”, 7’s were “reverse”, Aces were “skip”, and 2’s were “pick up 2”.

Recently, Aristotle’s aunt bought him a new board game called Snake Lake and it reminded me that Aristotle’s getting into that fun age where he’s old enough to understand how to play a lot of the board games now. Of course, Hercules is still our limiting factor because he’ll want to “play”, too, and that usually means we can’t play.

Since we’re on to “old fashioned” games… Another one we still play is “hide and seek”. Now tell me a child who doesn’t love “hide and seek”? Of course, Hercules still hasn’t quite mastered the art of hiding well because he gives himself away every time! Sometimes, we make it interesting by hiding a special object and give “hotter”/”colder” clues. If we’re feeling really creative, we make a map and play the treasure hunt game.

Another game I’d like to dig up from my childhood and introduce to the boys is Twister. Now there’s an idea for a party game…