Flashcards for common fruits and vegetables…

Here is a summary of the flashcards in this series:

After my last attempt to add spinach to chocolate brownies, I promised to try another of the free recipes from The Sneaky Chef This time I tried the Peanut Butter and Jelly Muffins.  Once again, I got Gavin to help me – which he was only too eager to do.

Once again, I made some slight modifications to the recipe, although nothing which I think would have affected the final outcome too much.  Gavin enjoyed the process of making the muffins immensely, especially because he was already excited by the prospect of eating muffins.

A while back, I bought Gavin a book titled “Mickey Mouse Clubhouse: Mystery of the Missing Muffins” – a book which he’s been very fascinated with for quite some time.  Although the book helped to pique his interest to taste the muffins (as you can see in the photo below where he was hovering around the freshly baked muffins and attempting to “cool” them more quickly by blowing on them), I’m afraid the muffin taste test failed miserably.  Gavin took a couple of cursory bites before declaring that he didn’t want any more. 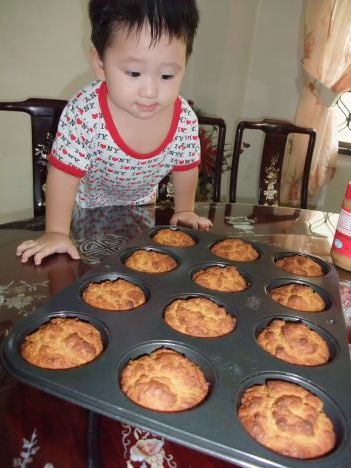 What did I think?

For a supposedly “sneaky” recipe, this one tasted dreadfully “healthy”.  Despite the rather low quantity of carrots and the addition of peanut butter to mask the flavours, I could still taste them.  I think a little cream cheese frosting would have made it a little better, however, I would much prefer to eat a carrot cake with loads more carrots than these muffins.

I don’t think I’ll be trying this recipe again, although I struggle to figure out what to do with the excess pureed carrots in the fridge which I had better do something about.

Despite this dismal failure, I will give the Sneaky Chef one last try (third time lucky) before I make my final decision on its effectiveness on helping my son eat his veggies.

After hearing so much about The Sneaky Chef and the art of hiding veggies, I couldn’t possibly walk away without at least trying it on Gavin.

As it stands, Gavin doesn’t eat veggies.  The only dish I have ever been able to get him to eat with veggies in it is his favourite “green pasta” dish at Banquet in Bangsar Village 2.  His “green pasta” contains brocolli and salmon – two foods I could never get anywhere near him.  Yet, for some strange reason that I will not question but continue to thank God for, he loves his “green pasta”.

That inspired me to try one of the free recipes from the Sneaky Chef entitled “Brainy Brownies” which contains spinach, blueberries and oatmeal.  You can click the link for the actual recipe.  I made mine with the following some minor modifications:

This was what I got: 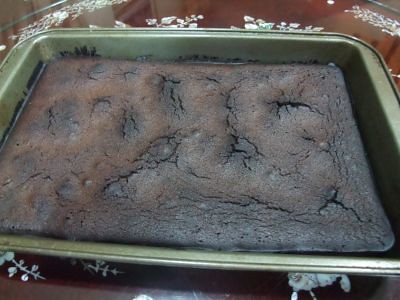 I should have taken some shots of the cut brownie, however I can definitely say it didn’t look anything like the picture on their website.

The process of making the brownie was very easy and fun.  Gavin helped me out and seemed to be enjoying himself.  I, on the other hand, felt the strain of cooking with a toddler who insists on tipping jars upsidedown and flicking the flour mixture onto the work bench.

As for the taste test, it passed both my SIL2’s, the maid’s and my taste buds.  Although Debbie says she can taste the flavour of the spinach, I can’t really say I noticed it myself.  If you fed this to me without telling me the ingredients, I definitely couldn’t have told you it had spinach or blueberries in it. A little charred for my liking but definitely more than edible.  I might try the lower cooking temperature in future to see how it turns out.

What did Gavin think?  I don’t think he was all that crazy about it.  I mean, he ate it and he nodded when I asked him if it was nice, but he wasn’t exactly pestering me to eat more of the stuff.  He had a few mouthfuls at most but that was it.  He seemed more interested in playing with it than eating it.

I might try the recipe one more time without burning it (and perhaps chuck it into the mixer for a spell) and see if it makes a difference to my son’s highly selective taste buds.

As far as The Sneaky Chef’s concept of hiding veggies in yummy foods goes, I still haven’t given up.  This is only the first recipe I’ve tried, after all.  I might give a few more of the free recipes a go before deciding if the recipe book is worth pursuing.

What about you?  Have you tried making any of the recipes from The Sneaky Chef or Deceptively Delicious?  How did they turn out and what did you think of it?