I’ve always had a thing for mazes – especially those life-sized hedge mazes like the one I saw in Ashcombe Maze when I was younger:

Judging from the reaction I had from the boys when we visited The Maze in Swan Valley, I reckon they’re partial to mazes as well. Unfortunately, the hedge maze wasn’t ready back when we visited so our experience wasn’t nearly as cool as it could have been.

The plan was to take the boys to Ashcombe Maze during our next visit to Melbourne but while I was looking it up, I discovered that there are quite a number of other hedge mazes in the area…

A Maze’N Things is a fun family attraction located at Phillip Island with five main activities:

They also have a “sweet and creamy” Lolly Lips for the sweet tooths.

Here’s a snapshot of the things they have:

Or you can watch the following video for a quick tour of the place:

There are a number of other attractions in the vicinity of A Maze ‘N Things so you can make the most of your drive out there:

Located at Arthurs Seat on the Mornington Peninsula, the Enchanted Adventure Garden offers these attractions:

There are also lots of other things you can do in the area:

The Tangled Maze is located in Creswick which is northwest of Melbourne – roughly in the vicinity of Ballarat/Daylesford.

A Maze’N Games is located in Wallington on the other side of the bay. It has only two attractions – mini golf and a wooden maze.

Hedgend Maze is located towards the northeast in the vicinity of Healesville Sanctuary. They have a 1200 meter hedge maze, a blindfold Native Maze, and a rainbow maze. They also offer mini golf, puzzles games, outdoor laser tag, and a fossil dig.

Last but not least, there is Ashcombe Maze, which is in Shoreham (not too far from Mornington and the Enchanted Adventure Garden). This place has three mazes:

There is also a Woodlands Garden with lots of things to see.

There are more images here from Melbourne Playgrounds:

Down a little further on the Mornington Peninsula is another hedge maze called Boneo Maze and Mini Golf that we missed when we originally wrote this post. They also offer, giant mini games, an adventure zone, wetlands, and a mini golf course. Should be worth noting that these are only open on weekends:

While we were planning out trip to Melbourne, one of Aristotle’s requests was to see snow. After seeing so many references to it on the idiot box, he was just itching to see what it was like in real life. So we planned a trip to Lake Mountain – the nearest mountain to Melbourne with “snow” (okay, so most of it is man-made but the effect on a child is about the same – it’s white, it covers everything, and you can make a snow man out of it).

After we arrived in Melbourne and Aristotle was constantly complaining about the cold, I had grave reservations about how much he would enjoy the “snow”. If I anticipated the disastrous repeat of our trip to Sovereign Hill (more about that in another post), I was pleasantly surprised. Not only did Aristotle love the snow but he enjoyed it so much, he didn’t want to go home. He finally agreed only after we promised a return visit with Daddy. Hercules played until he was ready to drop from fatigue so he didn’t really argue when I took him back to the car to change his clothes.

We borrowed a couple of really cool toboggans from my aunt and I had this image in my mind about how much fun the boys were going to have with them. Just looking at these toboggans brings back fond memories of my snow trips up to Lake Mountain as a child, although our toboggans were a far cry from these fancy-looking ones. They were more like oversized, plastic serving trays with a string for a handle.

It’s funny how few things ever go as anticipated with children. I thought they would both love tobogganing and it turned out that all they wanted to do was play with the snow, make a snow man (or rather get Mummy to make a snow man while they both simultaneously tried to undo all my efforts), and have a snow fight.

In Hercules’ case, all he wanted to do was roll around in it and slide down the hill on his behind. He wouldn’t get into the toboggan but he kept telling me he wanted to slide. I was confused until he dropped onto his behind and pointed down the hill then I realised that he actually thought he could slide down the hill like he saw on Ice Age (there is one scene where Sid, Manny, Diego and the baby are all sliding through an ice rollercoaster on their behinds). I tried to explain that it wasn’t possible unless he sat on the toboggan but he insisted in his frustratingly stubborn toddler way that it was. We were only able to avert a full scale toddler meltdown when I suggested we make the snowman. 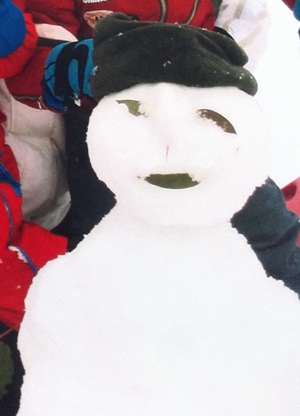 Aside from the minor temper tantrums, it was a fun day for all of us. Grandpa got some lovely photos of the boys. Mummy took a walk down memory lane making the snowman and throwing snowballs at the boys. Aristotle had a mission to make the biggest snow ball in history. Hercules demonstrated a budding rock climbing interest scaling the rocks and jumping into the snow. We only did a half-day trip but it was enough for both boys to crash in the car and sleep all the way home.

All in all, as far as first time visits to the snow go, a trip to Lake Mountain is sufficient if all your kids want to do is play in the snow. It’s an easy 2 hour drive from Melbourne that usually doesn’t require any special treatment to the car other than adding anti-freeze to the radiator (and making sure your car is fit to travel – NRMA has some good information on driving in the snow you can also check out). You can also stop off at Marysville at the base of the mountain to check the weather conditions to see if you need snow chains for your tyres (the visitor information center doesn’t open until 9am on weekdays, though).

You can also take a bus up if you prefer not to drive.

If you don’t have snow gear, you can hire them at Marysville before driving up to Lake Mountain, although you can probably get a better deal if you hire your snow gear from Melbourne. Lake Mountain is not Bulla or Hotham but it is still a good idea to get warm, waterproof clothes if you intend to play in the snow because the windchill can be pretty bad.

There is a bistro serving hot food and drinks, or you can pack your own lunch. There’s a nice little cafe at Marysville that opens fairly early if you want to have breakfast before heading up the mountain.

During the winter months, aside from playing in the snow and tobogganing on Village Run, you can also do cross-country skiing. There are lots of other activities you can do during summer, too – check them out here.

Check out their website for more information about Lake Mountain.

If you have a child that loves trains – especially Thomas and Friends – then you really have to take him on Puffing Billy (up in the Dandenong Ranges). 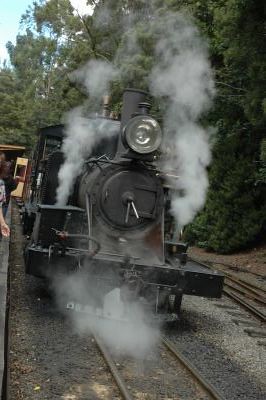 Puffing Billy is an old steam train that puffs along the Dandenong Ranges in Victoria.  It is a two-hour ride (up and back) through some rather scenic country-side on the outskirts of Melbourne.

They also have special events like “A Day out with Thomas”, “Drive a Steam Train”, a “Dinner Special” and others.  Unfortunately for us, “A Day out with Thomas” was fully booked up until April so we couldn’t take Gavin to see a life-size Thomas.  If you want to find out more about the events they have, you can check out the Puffing Billy website.

Gavin was a little dubious at first about getting on board, but once I’d shown him the engine and pointed out all the parts that were just like Thomas, he was quick to change his mind.  I also related the engine to the characters from the book.  For instance, the engine pictured earlier was black, so I told him it was Donald (although, technically speaking, Donald is a tender engine and the engine in the picture above is a tank engine).  And the engine below was a diesel engine, so I told Gavin it was Mavis.

While I was pointing out all the parts of the engine that I knew, the Fireman was standing in the engine room.  He must have overheard me and realised that Gavin was a train enthusiast (albeit a very young one) because he started chatting with Gavin, showed him the firebox and gave him a little piece of “special coal” as a souvenir.

He was a tad sleepy and fell asleep to the rocking motion of the train on the way up to Lakeside but he did manage to see some of the sights on the way back.

There is a souvenir shop with loads of Thomas and Friends merchandise.  We ended up buying a fleece blanket, a water bottle, a couple of magnets, and a couple of key chains.

Gavin is probably a little young to fully appreciate the fun of Puffing Billy, but I’m sure if we brought him back on our next visit, he’ll be much more excited.  We’ll also be sure to book a seat on the Thomas train way, way in advanced.